You could say things are getting desperate for the loonie. The Bank of Canada (BoC) raises its key rate to 50%, the West Texas Intermediate (WTI) jumps 9% over the week and the Canadian dollar falls? Admittedly, the rise in USD/CAD was minimal, 39 points to 1.2609, the rise in BoC was totally expected and the volatility generated by the war in Ukraine sent WTI back and forth from $114 to $94. for over a month.

This week’s action reflects the unusual balance in USD/CAD business. The BoC may have raised its key rate to 1%, but the Federal Reserve should do the same in just three weeks. Comments from U.S. central bank officials made the move a near certainty. The long-awaited reduction of the Fed’s massive $9 trillion balance sheet is also expected to begin at the next meeting. Both countries’ sovereign yields have risen in tandem over the past four months, negating any policy advantage to either dollar.

Russia’s invasion of Ukraine pushed WTI higher above $125.00 in its initial stages, but since then the move has been fueled by news flow without providing a permanent trend. When one political or military development boosts WTI, the next takes it away. 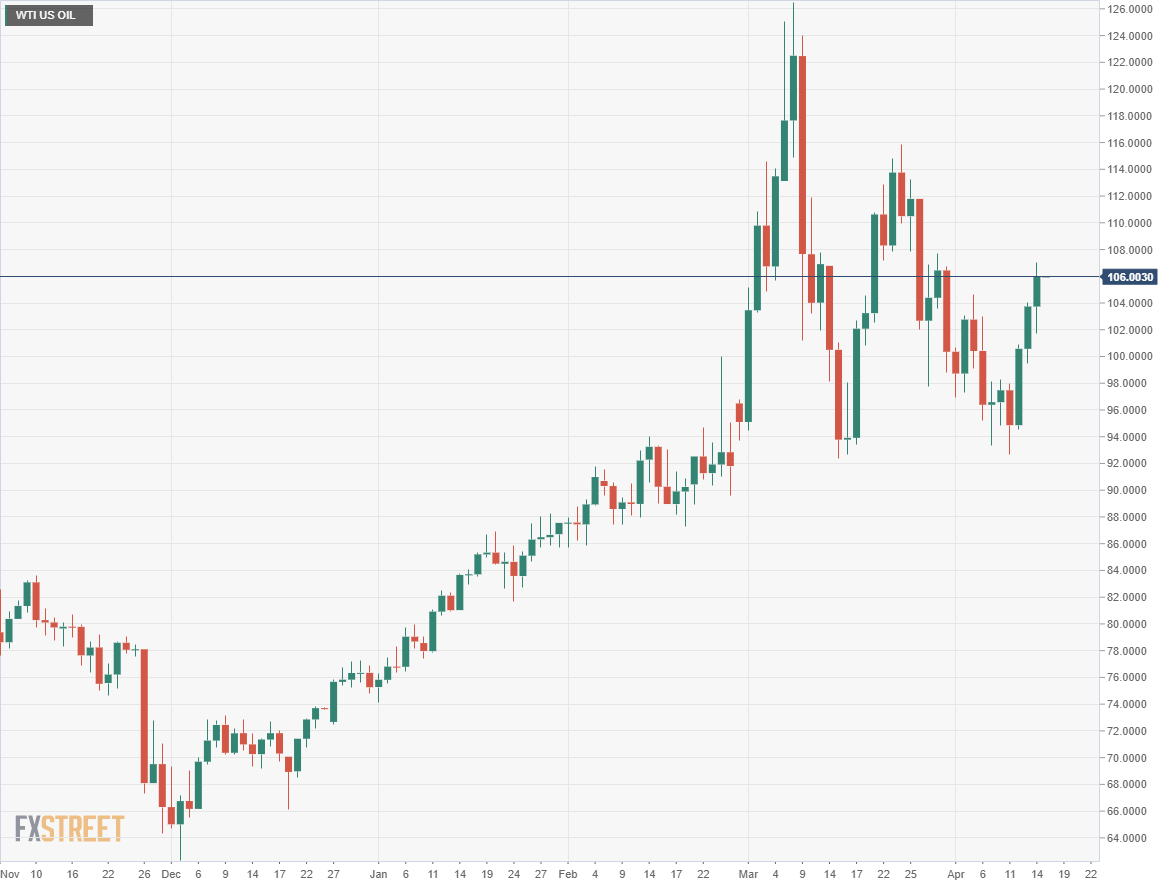 Moving averages (MAs) provide a picture of the relative stability of USD/CAD. The 50- and 100-day averages are above the market, the 200-day average marked Friday’s high and the 21-day MA is about half a number below the close. 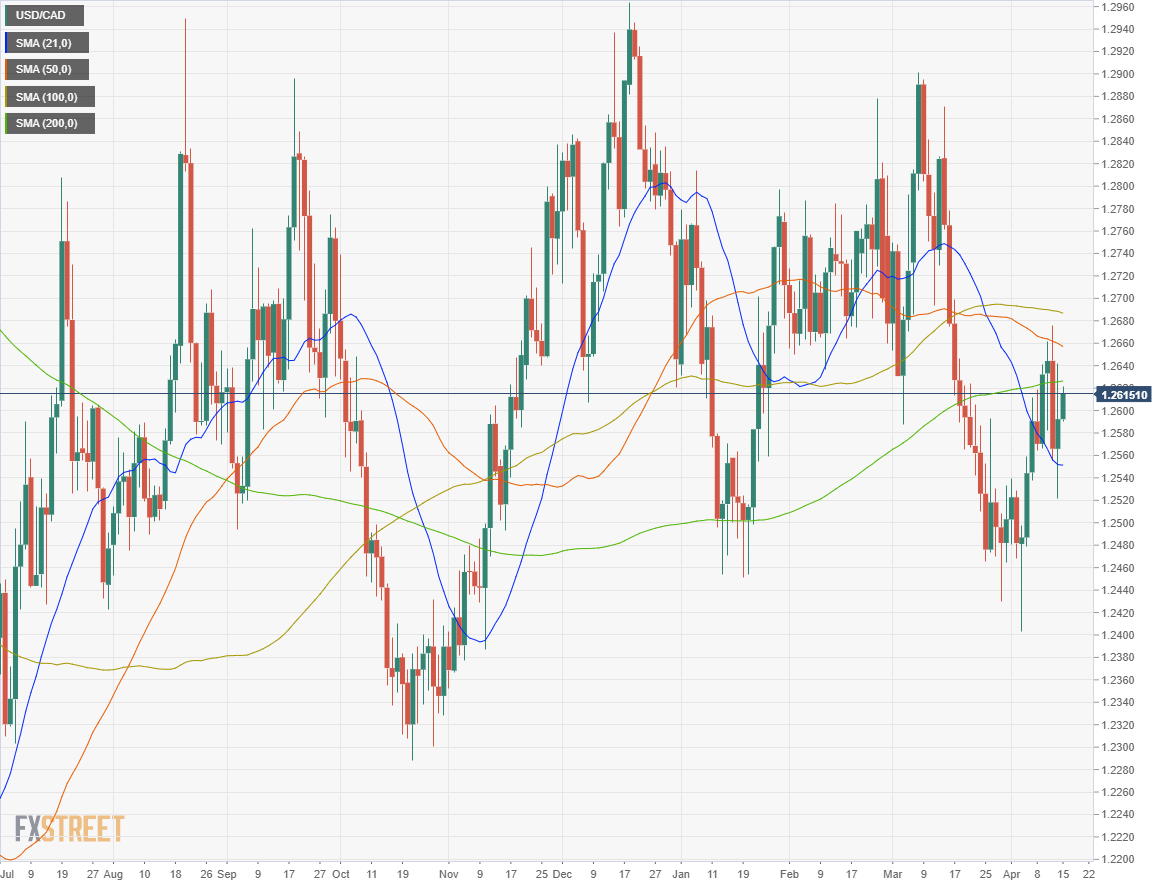 Over the longer term, the direction of USD/CAD will likely be determined by the energy market. The US and Canadian economies tend to rise and fall together and their central banks are in sync. Oil rose for a year before the Russian invasion on expectations that as the pandemic waned the global economy would recover and on anticipated supply restrictions imposed on the world’s largest producer by the Biden administration.

The immediate economic future is not as confident as it was a few months ago. China’s lockdown extremism in pursuit of its zero covid policy will have a negative effect on global growth and fuel the inflation that has flourished everywhere. Unless central banks can control near-term price increases, a dubious proposition, inflation could quickly force a pullback in consumer spending, reversing the fragile US and Canadian recovery. The drop in global growth will lower the price of oil and weaken the loonie.

Alternatively, the war in Ukraine could be settled, sanctions removed from the Russian economy, China opens its cities shut and global growth resumes with a consumer-led boom. Energy prices would then rise as demand outstrips supply, pushing the loonie higher.

“If demand responds quickly to higher rates and inflationary pressures ease, it may be appropriate to pause our tightening once we get closer to neutral and take stock,” Macklem said during the briefing. his press conference. “On the other hand, we may need to take rates slightly above neutral for a period to restore the balance between supply and demand and bring inflation back to target.” Another 50 basis point hike in June is now a real possibility.

The Canadian data was limited to February manufacturing and wholesale sales, which were generally weaker than expected, but with no impact on the market.

Many comments in the US market claimed that the 0.3% monthly increase in the CPI, below the forecast of 0.5% and the February rate, was proof that inflation had peaked . While this is possible, the continued large gains in the PPI, which will inevitably be passed on to consumer prices, make it doubtful.

U.S. retail sales were a little weaker than expected in March, but strong upward revisions to February totals more than offset the losses. The Control Group category, which mimics the contribution of consumption to GDP, fell 0.1% from a forecast of 0.2%. Even so, the Atlanta Fed’s GDPNow model for first-quarter growth remained at 1.1%.

Michigan consumer confidence rose for the first time in four months in April.

Volatile but inconclusive Canadian dollar trading is likely to continue over the coming week. Unless there is a substantial development in the war in Ukraine, last month’s range 1.2475 to 1.2650 should hold.

The policies of the Federal Reserve and the Bank of Canada evolve alternately, but with the same methods and the same objective. The BoC’s 0.5% hike on Wednesday, widely expected but not approached with the same certainty as the Fed’s May 4 hike, produced a mid-single-digit gain for the loonie. By Friday’s close, more than half of that increase was gone. There is no trend in USD/CAD and has not been since last June, although there was good trading volatility and a wide four-digit range. 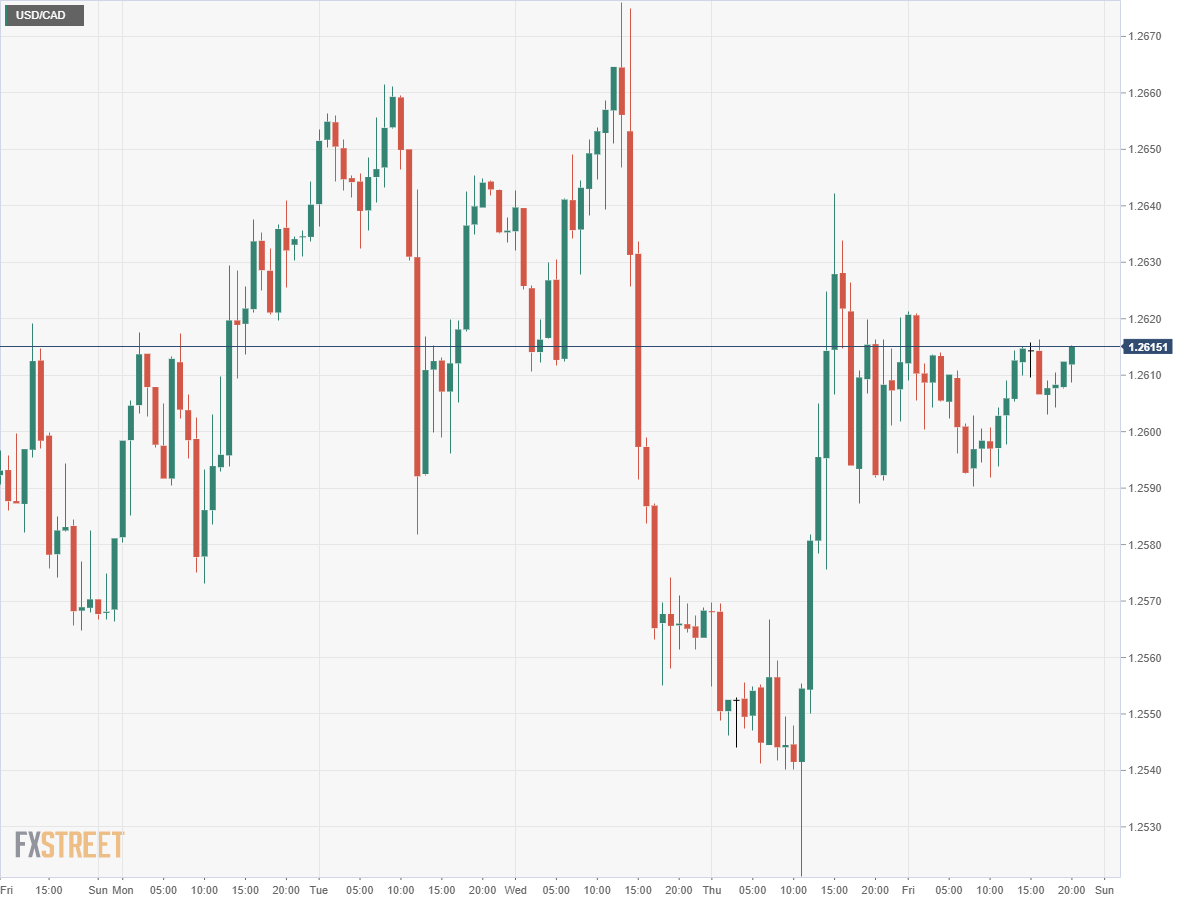 Canada’s CPI for March, released Wednesday, is expected to rise to 6.1% pa and 5% of the base rate of 5.7% and 4.8% respectively, which will keep the BoC’s foot firmly on the the rate accelerator.

The Fed’s beige book preparation for the May 4 meeting will convey its anecdotal analysis of the US economy, but with policy already decided, its addition is a bit outdated. Existing home sales for March, roughly 90% of the US market, should begin to show the weight of higher mortgage rates, adding another element to recession concerns.

Statistics Canada from April 11 to April 15

US statistics from April 11 to April 15 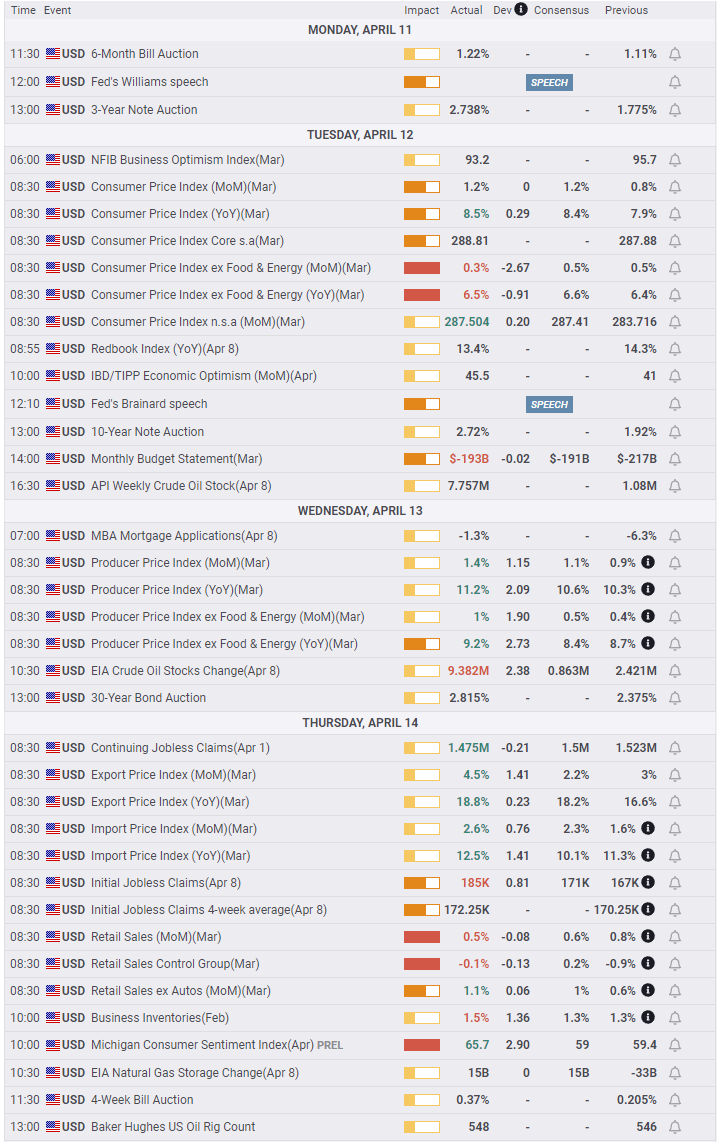 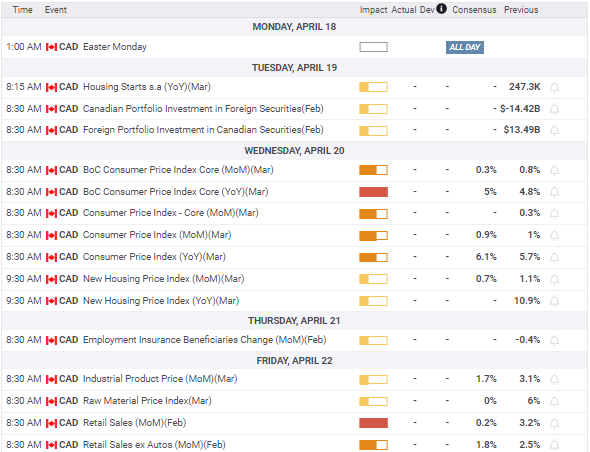 US statistics from April 18 to April 22 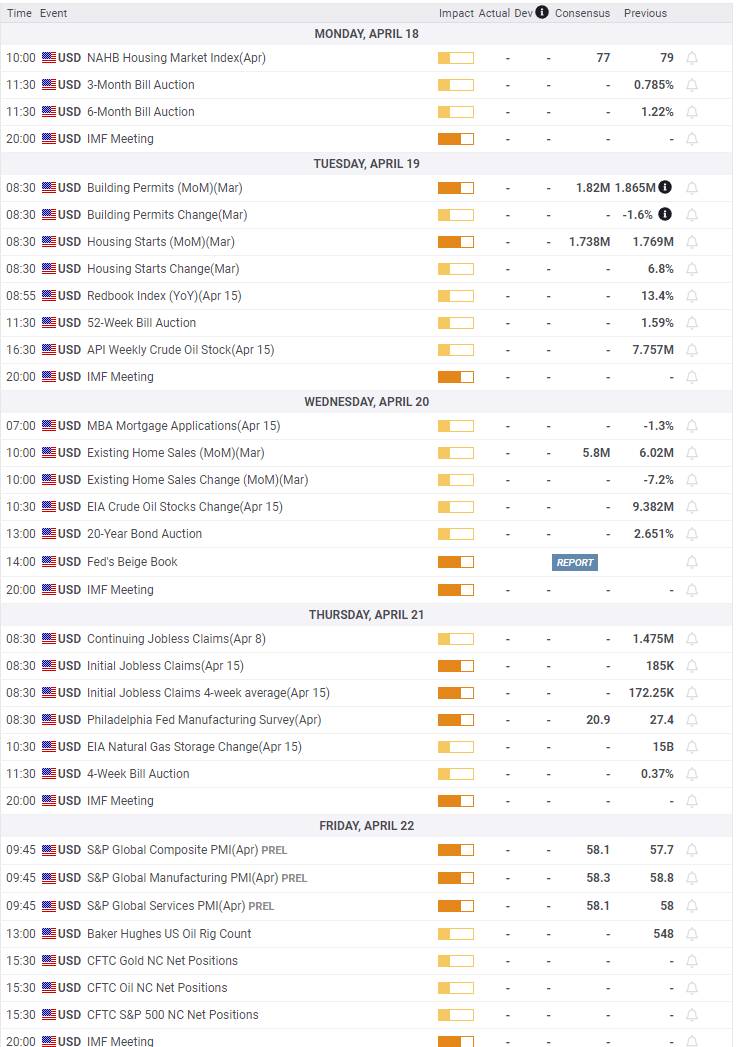 The MACD (Moving Average Convergence Divergence) and the Relative Strength Index (RSI) are neutral or almost. The wave function has tilted downwards this year, just as it was skewed upwards in November and December. There was no direction foreshadowing a trend in USD/CAD and that remains true. The Average True Range (ATR) has been down for a month and the brief recovery from the BoC rate hike has faded. 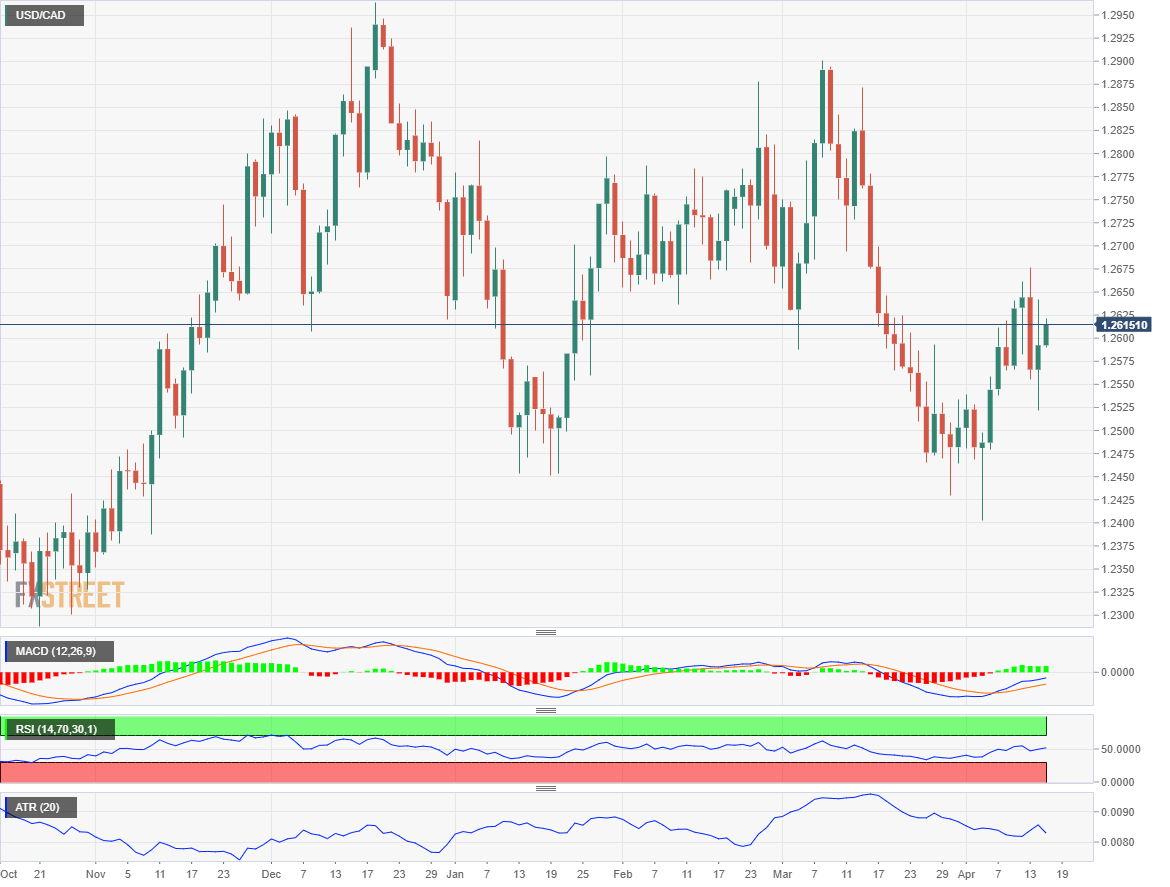 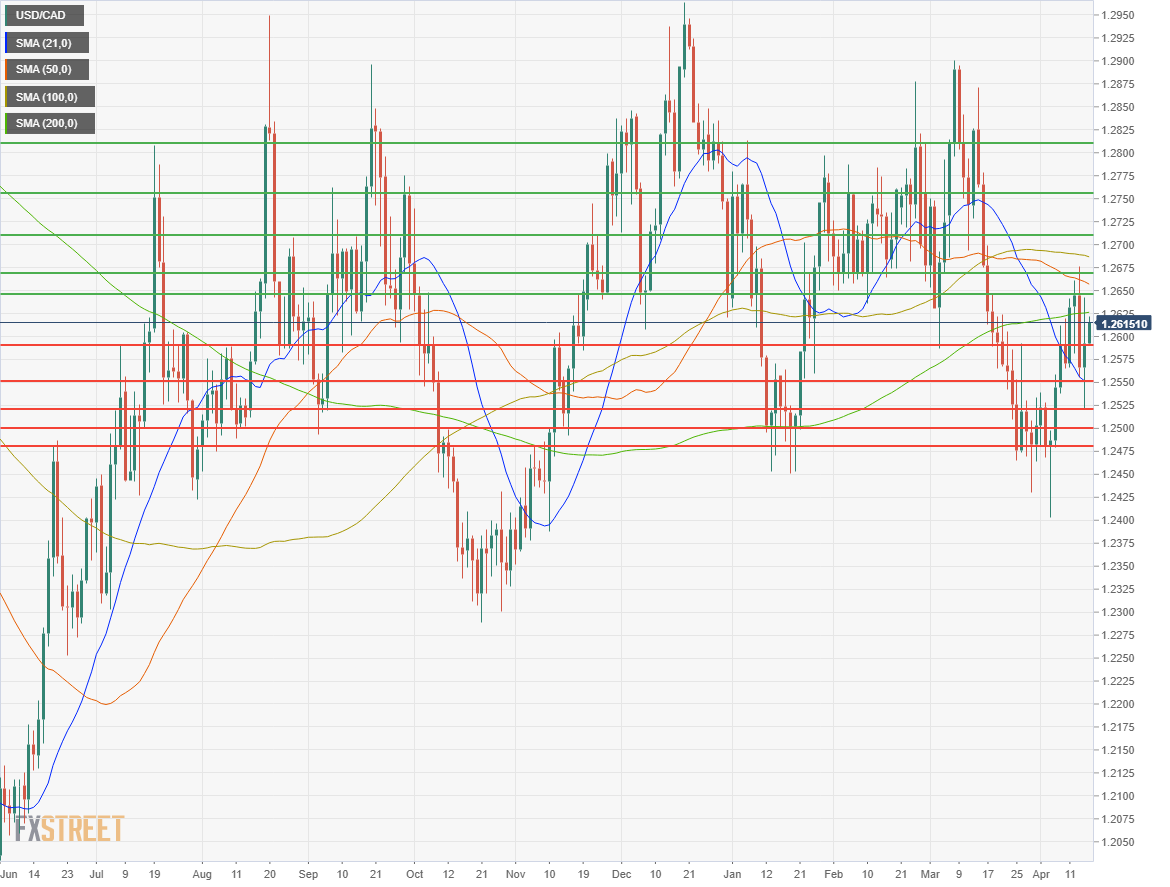 FXStreet’s forecast poll is neutral on a quarter. The range below half a number is consolidation personified.